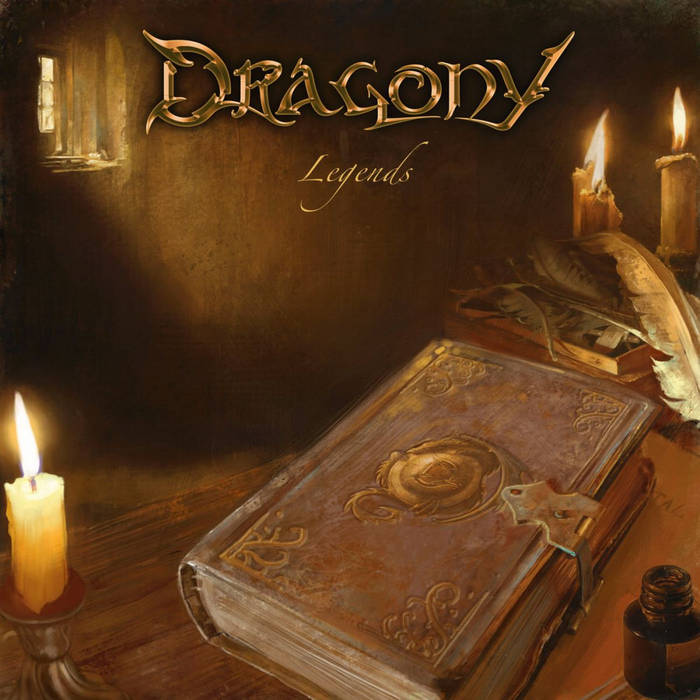 What first began as a project in the idyllic alpine republic has solidified into a real band. Everyone knows that Austrians don't do things half-heartedly and it was only to be expected that the former DRAGONSLAYER PROJECT had evolved into a solid lineup by 2008. Since then the road led ever upwards for the six lads from Vienna. Being professional enough to recognize that the band name was a bit bulky, they changed it to DRAGONY in 2011 and continued their march forward. Their excellently produced debut album comprised of melodic, symphonic Power Metal with traditional character which stands up well against comparisons with the productions of long-standing international acts. So it is also no wonder that the Dragony musicians have become well known on the Austrian circuit. "Legends" combines the entire know-how of the six lads in ten songs, which span sounds from tough heaviness to high-powered melody lines. Overall, "Legends" can be summed up as high quality, symphonic Power Metal with ass-kicking melody inserts, powerful guitars and lyrics with insight. Daniel Stockinger, Andreas Poppernitsch and Siegfried Samer founded THE DRAGONSLAYER PROJECT in 2007, principally as a pure studio project with a focus on a long conceptual story, to be put into music with the assistance of a number of guest musicians. However, additional musicians were soon permanently integrated into the band and the project became a real band, soon playing its first shows allowing the members to gather stage experience. Word of the band's high standard soon got around and within a short time Dragony, as it was to become, were opening for international acts such as Axxis, Firewind, Paul Di'Anno, Serenity, Edenbridge and Sonata Arctica. Every chance to play live was eagerly taken, but they continued to work on their musical concept. They soon realised that the idea of a rock opera was a little too much to take on at such an early stage of their career, so they shortened it to a viable level and planned to use it for their first album. At the end of 2010 they entered the studio, in order to record the first sounds of their debut album. Working with experienced professionals in the WildOneMusic Studios, the resulting album "Legends" was excellently mixed and given the final polish. In the meantime they gave some thought to the somewhat complicated band name and came to the conclusion that they needed something shorter and catchier. In early 2011 they decided on DRAGONY, and have been working under that name ever since. The work on the debut album lasted until the the end of 2011, but for good reasons: They had been able to talk numerous guest musician into contributing their skills, for example Tom Tieber of Ecliptica, Katie Joanne of Siren's Cry and naturally Ralf Scheepers of Primal Fear, all of whom give their best on the album, as do many other guest musicians from the Austrian scene. And it is exactly because of these additional performances by their guests, that the material retains a certain rock opera character. Fine-tuning the result was carried out by Mika Jussila during his wonderful mastering work in the Finnvox Studios in Helsinki. "Legends" unite a powerful wall of guitars in songs with huge choruses in songs, which are predominantly kept in mid-tempo style. The impressive, charismatic voice of Siegfried "The Dragonslayer" Samer, is hugely admirable, with its incredible volume driving every song forward. After a classical intro, DRAGONY get down to business with "Burning Skies", a bone-shaking, fast Power Metal number with a great rhythm, gilded by the exceptional voice of Ralf Scheepers (Primal Fear). After an ass-kicking headbanger beat in the first third of "Land Of Broken Dreams", the guitar duo Andreas Poppernitsch and Daniel Stockinger continue with brilliant riffs, clearly influenced by Avantasia and Hammerfall. This is pure steel being hammered into shape! The rather epic and theatrically configured "The Longest Night" changes speed and feeling during its entire playing time, making the track extremely varied. Of course, as far as DRAGONY's overall sound goes, one finds similarities with bands such as Edguy, Kamelot, Sabaton and Stratovarius, bands with unforgettable, attainable, melodic elements, somewhere between traditional, classical heavy metal and epically configured song structures. "Legends" and its high quality will not disappoint any fan of those bands - this album is far too good for that! So if you are ready to ride into battle with elves, dragons and dwarves, then saddle your steeds, sup your last tankard of ale and join us!

What first began as a project in the idyllic alpine republic has solidified into a real band. Everyone knows that Austrians don't do things half-heartedly and it was only to be expected that the former DRAGONSLAYER PROJECT had evolved into a solid lineup by 2008. Since then the road led ever upwards for the six lads from Vienna. ... more

Bandcamp Daily  your guide to the world of Bandcamp